A lot greater than the sum of its parts. And a great rum over all.

So as we get close to Christmas I will sit down and take my time with my first review of a rum from Italian outfit Rum Nation.

Like many others Rum Nation is considered an individual bottler and they travel around the Caribbean and Latin America to pick some of best rums available and label them under their own name.

They are widely accepted as one of the best individual bottlers out there and all of this is due to the talent of the one and only Fabio Rossi.

If you want a deeper dive into the history of Rum Nation, I advice you to drop by Lance’s site The Lone Caner and check out his essay on the company. It is a great read. Link supplied at the bottom of this review.

Fun fact: Fabio Rossi is also responsible for Ron Millonario out of Peru.

There is no indication as to which distillery this rum originates from. However being a Panamanian it could be of either Varela Hermanos (Abuelo) or Caribbean Spirits Distillery (Ron Malecon) fame. However the bottle states that it is a Don Pancho rum – and Don Pancho does not operate out of the Varela estate.

Edit: A very kind facebook-user has informed me that Caribbean Spirits Distillery isn’t located in Panama, but that there are in fact two other distilleries in Panama, apart from Varela Hermanos, which could also be the origin of the Panama 21. Namely, Carta Vieja and Ingenio San Carlos.

Since Rum Nation are very accurate with their age statements we can assume that this is truly a 21 year old rum.

The first thing that leap out is the box. A nice thick cardboard box with a silver bottom and a black lid. Very nice! On the lid the treasure inside is outlined in silver. 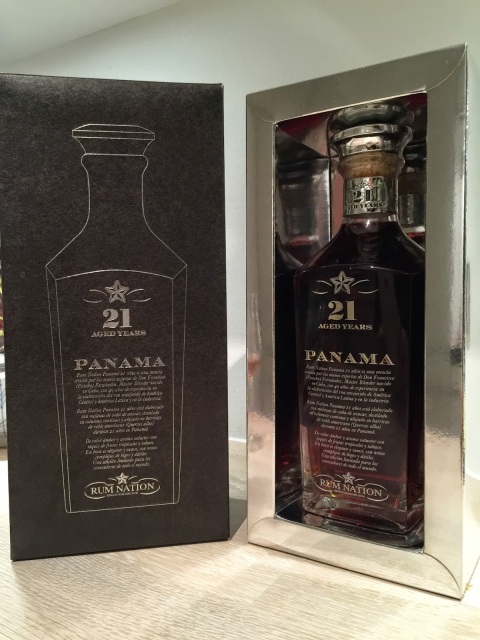 When removing the lid you are treated to a square based decanter style bottle which reeks of quality and elegance. There is no doubt that I am holding something special.The bottle has a silver necklace which only tells you the brand and the age of the product.

Keeping the thing closed is a natural cork with a plastic stopper which fits the overall presentation perfectly.

There is no label. That’s right. No label.

On the front of the bottle there is a lot of text written directly on the bottle. The age and the origin is the most notable of all the details. Furthermore we have the Rum Nation seal and a lot of Italian prose. Like so many times before I feel a bit challenged and will have to assume that it is another piece of poetry – just like on the Velier that I reviewed a while ago.

Of course the exotic language adds to the whole experience but I would have liked a translation (guess I could have gone to Google translate, but I would much rather get to the tasting of the rum).

On the back of the bottle we do actually find a tiny label – or actually it’s a cheap see through sticker. Bummer.

The only piece of new information is the 40% ABV – and the warning that pregnant women should not be drinking this. But that is hardly newsworthy – any of it.

Pouring it into the glass it hints a medium character with rather easy flowing droplets on the inside of the glass. The color is dark orange and ruby.

When taking the lid off the first I noticed was a tiny breath of fresh air taken from huge lawn after a summer drizzle. Then loads of tangerines covered in mild oak and maple syrup. This initial lushness was followed by dried dates and a mild tobacco/leather shadow.

All the scents seems super balanced and that underlying freshness made it all feel new and something else than you typical run of the mill.

The taste follows up perfectly on the nose. The dominating parts are still maple syrup, ripe oranges, and subtle oak spice.

At times the orange part even draws parallels to Grand Marnier and Cointreau – but without being as sweet and sticky as your typical liqueur.

In the background there is even a hint of banana peel and tobacco.

It all feels so very balanced, very smooth and very thought through. It is almost like underwear made from all the best of velvet, satin and silk.

The finish is rather short. It is nicely sweet without being too sticky. Full of oranges without being too much like a liqueur. There is still a little oak present along with a ever so slight peppery sting. Just a touch. It never gets unpleasant. It is just there long enough to make a impression but it doesn’t overstay its welcome.

Sometimes you are just so surprised that you have to capitulate. Under normal circumstances I might have thought of this rum as being too sweet. But because it all is so very balanced and no where near sticky, I have to admit that I like it very much.

When it comes to sweeter Spanish styled rums, this is so far one of my very favourite ones.

At a price around €80 it would have to be quite good, since it is up against other great rums like the Mount Gay 1703, the El Dorado 21, the Zacapa XO and even the likes of Appleton 21 and Millonario XO.

But I believe that the Rum Nation Panama 21 is able to more than just hold its own against all these mastodons. It even eclipses some of them.

Perhaps this rum is an example of a product which is actually even greater than the sum of its parts.

That is why that I have to deal out a…

I have later learned that there was a great dispute between Mr. Rossi and Don Pancho regarding the origin of this rum.Mr. Rossi claims to have a certificate of purchase, which states that this rums comes from Don Pancho.

However Don Pancho refuses to acknowledge it as a Don Pancho rum, as it has been through a broker, and therefore he has no way of being certain that the rum is still the same, as when it left the distillery.